For the most part our administrative staff keep the Centre running from behind the scenes, but Jo Allen at the ANU has leapt at the opportunity to participate in a bold enterprise.

Every year Jo collects donations for breast cancer, but in 2015 it was time to go an extra mile. This month she joined a team of sixteen cyclists on a 350km ride from Ho Chi Minh City, Vietnam to Siem Reap, Cambodia as part of an epic fundraising event for the Breast Cancer Network Australia. Every member of the team had been touched by illness in their families, and five of the women were breast-cancer survivors. 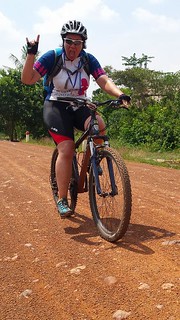 Full days of cycling in conditions of extreme tropical humidity were a physical challenge, but sore bums presented the greatest test of endurance.

"The mental component was really hard," says Jo. "And I never knew how important butt cream was!"

In a part of the world where mirrors and indicators are luxury, the cyclists had a few harrowing moments in the traffic, but two days in the Angkor World Heritage site made it all worth while.

Breast Cancer Awareness Month is creeping to a close, but you can still sponsor Jo until the end of October.