Darja Hoenigman returns from fieldwork on the fringe

Darja Hoenigman is no stranger to the challenges of fieldwork. Recognised for her pioneering study of the Awiakay, she has recently returned to Papua New Guinea to start working with the neighbouring – but elusive – Meakambut community of the Sepik region.

Although they number no more than forty-four individuals, the Meakambut are nonetheless an endogamous society and speak their own language which they refer to as Meambul momba or 'Meakambut talk'.

Inhabiting the lowland tropical forest areas, they move from camp to camp, following the wild sago palms as they mature in order to extract their starch for subsistence. The quest for sago takes them through the fringe highlands of East Sepik Province where the mountainous limestone terrain offers shelter in caves and rocky overhangs.

The semi-nomadic Meakambut are one of the few groups in Papua New Guinea to maintain a near exclusive hunting and gathering lifestlye. In fact, it is surprising how much have they have in common with hunter-gatherers in places like the Kalahari of southern Africa, in contrast with their closer but sedentary neighbours. 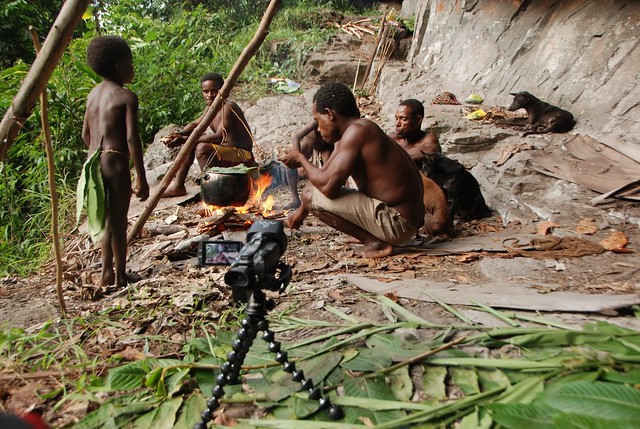 Nearby communities believe that the nomadic movements of the Meakambut are necessary in order to guard the sacred rock from which all people, spirits and animals first emerged into the world. It is said that all kinds of disasters would ensue if the Meakambut neglected their duty by settling in one spot.

The tiny size of the community together their semi-nomadic existence presented a challenge to Hoenigman who had no conceivable way of making contact. It took a lucky coincidence before she located their whereabouts. One morning, a Meakambut man happened to pay a visit to Imboin village where Hoenigman was in the process of preparing for an exploratory expedition. Luckily for her, it turned out that a group of Meakambut was staying in a down-river camp at the time, saving her a fruitless and exhausting trek into the mountains with all her equipment.

After this chance encounter Hoenigman spent another month living and travelling with the Meakambut to try to establish a relationship of trust and begin her recordings.

She is far from reaching any conclusions but has collected a swathe of fascinating material which she hopes to get transcribed and translated in her next round of fieldwork from December 2015 to June 2016.