Book launch a milestone for PARADISEC

The Pacific and Regional Archive for Digital Sources in Endangered Cultures (PARADISEC) is an official partner of the ARC Centre of Excellence for the Dynamics of Language.

Centre members are already using the archive to deposit audiovisual recordings, photographs, documents and other materials so that they will remain available for generations to come.

It is now twelve years since PARADISEC was first dreamed up by a starry-eyed team of scholars at the University of Sydney, the Australian National University and the University of Melbourne. It has since grown to represent over 860 languages from across the world, including cultural materials from the Pacific, South-East Asia, North America, Africa and Europe.

PARADISEC's international reputation and its enormous popularity for both scholars and language communities is driving its expansion even further. In 2008 it won the Versi e-Research Award for the 'best digital humanities project' and has recently been included in UNESCO Memory of the World Register.

To celebrate more than a decade of success, Sydney University Press has just released Research, 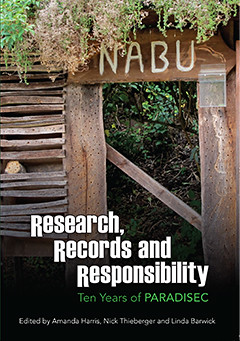 and Responsibility: ten years of PARADISEC, a volume edited by Amanda Harris, Nick Thieberger and Linda Barwick.  The volume includes contributions by Nick Thieberger, Amanda Harris and Linda Barwick ('PARADISEC: its history and future'), Sally Treloyn and Rona Googninda Charles ('Repatriation and innovation in and out of the field: the impact of legacy recordings on endangered dance-song traditions and ethnomusicological research') and David Nathan ('On the reach of digital language archives') among others.

The launch will take place this coming Friday 2 October at the Musicological Society of Australia conference in Sydney.

Copies can be pre-ordered from the Sydney University Press website.